What Sudoku taught me about life!

By Debbie DiVirgilioAugust 7, 2014No Comments 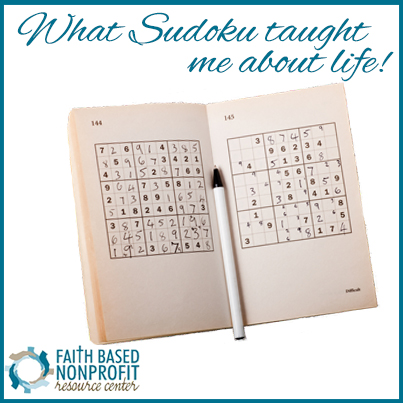 A few years ago, I began doing Sudoku.  Why, you might ask.  Well, I read a magazine article that said doing puzzles was really good for your brain and that they would help keep all of the synapses firing efficiently.  Ultimately, the article said, doing puzzles would help you stay young.  Like most American women, I think about the aging process and want to do things to keep myself young. Sudoku puzzles seemed like an easy way to stay young.

And so, my adventure began. I began buying Sudoku puzzle books and solving even the most difficult puzzles. Then, I received a Kindle.  I discovered that I could download a Sudoku app and have puzzles of varying degrees of difficulty available to me all the time. I was so excited to begin working on electronic puzzles.

My fascination with Sudoku wore off to the point that I was only doing a puzzle once or twice a week. Recently, however, I have once again “caught the Sudoku bug.” A week or so ago, I realized how much Sudoku was like life.

While working on an electronic version of Sudoku, anytime that I determined the puzzle was too difficult or was taking too long to complete, I could just push the left arrow key and start a new puzzle.  No one would ever know that I had started something that I did not complete. And, when I wanted a quick victory, all I had to do was select an “easy” puzzle. One morning as I pushed the left arrow to start again, I realized that all too often we get in the middle of something and determine that it is taking too long to be successful or we deem it too difficult and we back out, or decide that perhaps the goal we were working toward was not really our goal at all. In other words, we look for ways to rationalize and justify our actions for not continuing our efforts. And sometimes, if we decide that the goal we were working toward is too difficult, we settle for something else…something not quite as difficult, something easy.

So, I ask you, have you quit working toward your goals because things got difficult? It is easy to get discouraged and frustrated, but I encourage you to never give up. Your goals and passions are yours and yours only! Maybe you need some help, that’s ok, just never, ever give up!

You are probably wondering, do I ever hit the left arrow now.  Well, yes, I do, but when I do, it is a very conscious decision, and one that I do not take lightly.